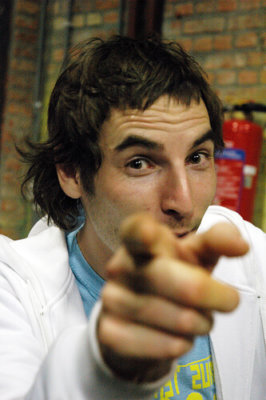 Blaming – the fine art of making others responsible for all the difficult things that happen to us – is something our modern society seems to support as perfectly acceptable. Reality TV shows force feed us scenes of one character blaming another, and newspapers are awash with stories about how all of society’s problems are to be blamed on politicians or terrorists and there is nothing we can do.

But is our culture of blame helpful?

Psychology talks about the ‘self-serving bias’, with researchers discovering that many of us will take the credit for ourselves if things go good in life, but lay blame on circumstance when things go bad.

For example, imagine taking a driver’s test. If you just pass, then you will likely make it an internal reason – I studied hard, I’m actually a good driver naturally. But if you just fail the same test, suddenly there is an external reason – the weather was bad, it wasn’t the car I usually drive, I didn’t get enough sleep.

But blaming circumstance is one thing. Blaming people, especially those close to us, when things don’t go well is another. And it and can have a severely damaging affect on our relationships, families, and career.

Why do we blame other people?

1. Blaming others is easy.

Blame means less work as when we blame, we don’t have to be held accountable. It’s really the opposite of being responsible and all the work that that entails.

3. Blame means you don’t have to be vulnerable.

“Accountability by definition is a vulnerable process. It means me calling you and saying my feelings were hurt by this, and talking…. People who blame a lot seldom have the tenacity and grit to hold people accountable…. and it’s one of the reasons we miss our opportunity for empathy”. 3. Blaming others feeds your need for control.

But if you blame someone, then you have control of the story, both past and future – they are bad, hence things happened the way they did, and it’s all their fault, hence you don’t have to deal with it further.

Do you tend to rarely show emotions, or believe you ‘never get upset’ or are the ‘laid back calm type’? At the same time, do you tend to lay blame on others when push comes to shove? It’s likely that you are using blame to unload your emotional pain which you do feel, but are repressing. And it can feel a great relief to unload, so you might be blaming a lot for this very reason.

In a way, blaming is form of social comparison that is status-seeking. If you blame someone, it puts you in the superior seat, making you feel more important and the ‘good’ person as opposed to their ‘bad’.

Of course some people use blaming to make themselves a victim. This is really still an ego move, as when you are in ‘poor me’ mode it means you get everyone else’s attention, and are still the ‘good’ person.

Whether you are using blame to be superior or a victim, both come from a lack of self-esteem. The question to ask might even be not so much ‘why am I blaming’, as ‘why do I feel so bad about myself I have to blame others to feel better?’

What are you losing out on by blaming?

If you want to think that blaming is not something to worry about, think again. Blaming others can have long term consequences on your life and personality.

Here’s what you stand to lose – Blame is a defence. And spending time constantly defending ourselves is really a part-time job that also leaves us shut down to what others have to offer us in terms of lessons and growth.

If you use blame to avoid accountability, you are also avoiding speaking truthfully about how you feel and accepting and listening to how others feel. Constantly sidestepping this powerful, vulnerable process of negotiating and communicating means you are not likely to develop empathy for others. In fact research shows that it’s narcissists, with their self-obsessed attributes, who are prone to blame more than others.

Given that blame sidesteps healthy communication, which relationships need to thrive, it’s not surprising that if you are a blamer it’s likely you don’t have strong relationships with others. Blaming others is a way of putting people down so naturally it is also a great way to instead push people away, or create a dangerous environment where there is no trust and the other person can’t relax as they always feel judged and devalued.

5. Your positive influence on others and yourself.

Blame has been found by a recent study to be contagious. If you blame, those around you are more likely to then turn and blame others for things. In other words, you are spreading the tendency to avoid responsibility to those around you, both at work and at home. Think about the implications that brings, especially if you have young children or are in a position of leadership where others look up to you.

And you are having a negative influence on yourself as well. Blamers were found to be more ego defensive and also chronically insecure. So the more you blame, the less your sense of self worth.

What to do if you are caught in the blame game

So what can you do if you realise you are too quick to blame?

Start by working on your self-esteem. The more self worth you have, the more you will able to manage being responsible for yourself. And the more you can accept your own humanness and capacity for error, the more you are likely to accept and understand it in others, too.

It can also help to stop telling the story. We all need to get things off our chest with friends we trust now and then, but blame, recounted too much, tends to grow like a snowball. Each time we tell the story about how another person is the reason something went wrong, we add a little bit more, making them more responsible and us less so. Eventually, without even noticing, we can be blaming them for things that aren’t even related to them.

So stop relating the story. Go cold turkey even for a day, and notice what it does for your energy levels and mental reasoning around the situation – blame often creates a fog that, when it lifts, we can see a whole other perspective without.

If you are going to tell the story, tell it to a therapist. A professional coach, counsellor, or psychotherapist can not only help you see where you are not taking responsibility, they can help you repair relationships and learn new ways of behaving that see you stepping into, instead of away from, your personal accountability and power.

Do you have something to share about blame that we’ve missed? Share below – we love hearing from you.