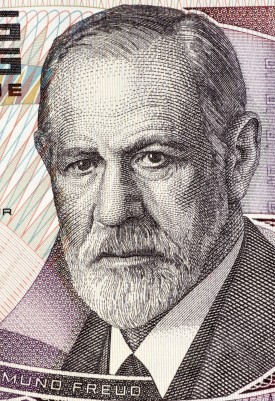 Sigmund Freud and His Main Theories

Let us free associate for a second…. What comes to mind when you think of counselling or psychology or even psychiatry? For many of us these words are often centred upon the ideas and work of one man…Sigmund Freud. Images of patterned sofas, Cuban cigars, ambiguous ink blots, Freudian slips and a penchant for all things sexual flood our minds at the very mention of this infamous characters name.

But if we look beyond the brushstrokes of popular culture, what do we actually know about Sigmund Freud’s main theories, and how do these theories relate, if at all, to modern day psychoanalysis? This article hopes to explore in a little more detail some of the main ideas and works of the great man himself, and highlight just how far psychotherapy has come since Freud set out his ideas in the early 1900’s.

Who was Sigmund Freud?

Sigmund Freud (born Sigismund Freud) was an Austrian neurologist born on the 6th May 1856 in a small town named Freiberg, Moravia (now the Czech Republic). Although born to a relatively poor Jewish family, Freud originally planned to study law at the University of Vienna but later changed his mind and opted for medicine. Upon graduating, Freud began work in a psychiatry clinic in the Vienna General Hospital. Psychiatry at this time however took no interest in the psychological components of mental health, but simply viewed behaviour in light of the anatomical structures of the brain.

After spending four months abroad on placement in the Salpetriere clinic in Paris, Freud began to harbour an interest in “hysteria” and particularly the hypnosis methods of its leading neurologist, Jean Martin Charcot. Upon his return to Vienna, Freud left the Vienna General Hospital and set up a private practice specialising in “nervous and brain disorders”. There, along with his colleague Joseph Breuer, Freud began exploring the traumatic life histories of clients with hysteria, leading to the view that talking was a “cathartic” way of releasing “pent up emotion”. Consequently, along with Breuer, Freud published “Studies on Hysteria” (1895) and began to develop the first ideas towards psychoanalysis.

It was about this time also that Freud began his own self-analysis in which he meticulously analysed his dreams in light of unconscious processes culminating in his next major work “The Interpretation of Dreams” (1901).Freud had by now also developed his therapeutic technique of free association and was no longer practicing hypnosis. From this he went on to explore the influence of unconscious thought processes on various aspects of human behaviour and felt that amongst these forces the most powerful were the sexual desires in childhood which were repressed from the conscious mind. Although the medical establishment as whole disagreed with many of his theories, in 1910 Freud along with a group of pupils and followers founded the International Psychoanalytic Association, with Carl Jung as president.

In 1923 Freud published “The Ego and the Id” revising the structural make-up of the mind, and continued to work feverishly during this period developing his ideas. By 1938 and the arrival of the Nazis in Austria, Freud left for London with his wife and children. Throughout this time he was plagued by cancer of the jaw and after undergoing 30 operations, he died in London on 23rd September 1939.

One of Freud’s more famous theories was that of psychosexual development. Fundamentally, Freud postulated that as children we move through a series of stages centred on erogenous zones. Successful completion of these stages, Freud argued, led to the development of a healthy personality, but fixation at any stage prevents completion and therefore the development of an unhealthy, fixated personality as an adult. Although elements of this theory are still used in modern day psychodynamic/psychoanalytical therapy, over time the therapy has been replaced by more modern theory.

In his later work, Freud proposed that the human psyche could be divided into three parts: Id, Ego and Superego. Freud discussed this model in the 1920 essay “Beyond the Pleasure Principle”, and elaborated upon it in the “The Ego and the Id” (1923).

The Id: According to Freud the id is the completely unconscious, impulsive and demanding part of the psyche that as a child allows us to get our basic needs met. This part of the psyche operates on what Freud termed the pleasure principle and it’s all about getting our every need and wish met with no consideration of the reality. The id seeks immediate gratification.

As such, it is the role of Ego to strike a balance between the demanding id, versus the self- critical super ego. Freud stated that in healthy individuals the ego is doing a good job in balancing out the needs of these two parts of the psyche, however in those where one of the other parts is dominant the individual struggles and problems develop in the personality. The balancing act between these two aspects of the psyche can sometimes be difficult for the Ego and so it employs a variety of different tools to help mediate known as Defence Mechanisms. Some examples of defence mechanisms are:

Our conscious mind, however, according to Freud makes up a very small amount of our personality – as we are only aware of the small tip of the iceberg of what is actually going on in our minds. Freud also added a third level to our psyche known as the preconscious or subconscious mind. This part of the mind is the one that although we are not consciously aware of what’s in it at all times, we can retrieve information and memories from it if prompted. This is one of the most important Freudian contributions and is still very much used in psychotherapy today.

Although Freud’s main theories may seem a little strange at first (lots of criticism has come of them over time), much of Freud’s work remains central to some of our most fundamental understandings of psychology and of counselling and psychotherapy. For example, the use of free association, transference and counter-transference, dream analysis, defence mechanisms and the unconscious mind are all of immense value to modern day psychodynamic and psychoanalytical practice.

Freud’s theories radically altered the way that people understood the mind back in the 1900’s, and his development of the “talking cure” cannot be underestimated. Freud’s initial investigations and clinical practice are to psychology and psychiatry, as Newton is to physics. While we have in some respects rejected some of his theories in light of new evidence it was his ideas which provided a platform for other psychologists, philosophers, therapists and doctors to build on an explore.

Do you have questions about Freud’s main theories? Or do you have something to contribute? Join the conversation by commenting below.

9 Responses to “Sigmund Freud’s Main Theories in Psychoanalysis: A Summary”