“Don’t worry, be happy!” chants the well-known pop song. But faced with a world where unemployment, bereavement and ill health can hit anyone at any time, and the media presents us with one global tragedy after another, this can seem nigh on impossible.

Should we try harder to have a positive mindset? Be more relentless in our search for this thing called ‘happiness’?

According to Viktor Frankl, key figure in existential psychotherapy, and the founder of logotherapy, not necessarily.

Who is Viktor Frankl?

To understand logotherapy it is essential to know something about Viktor Frankl’s early life. A successful Austrian psychiatrist and neurologist living in Vienna alongside other fathers of psychiatry like Alfred Adler and Sigmund Freud (whom Frankl corresponded with), Frankl specialised in suicide and depression.

But then the Nazi’s took over Austria, and Frankl’s Jewish background saw him sent first to a Jewish ghetto, and then then to various concentration camps. The guards in the camps took everything away from him- his writings, clothes, his family, identity and freedom. He was made to endure slave labour and watched those around him die, losing everyone but his sister. In fact he came very close to death himself, being put into the line for the gas chamber but slipping into another line without being noticed.

Yet it was during this time of brutal suffering that Frankl began developing his therapeutic ideas that led to logotherapy.

One day, when he was subjected to beatings and punishment by guards, he had an epiphany. Though his body was controlled, his mind could not be. Though he was in pain and suffering, he still had freedom to choose his thoughts and feelings. He could chose, for example, to dwell on a past blissful experience – and no one could stop him. It is from Frankl’s understanding that one can discover meaning and a reason to live even in the presence of brutality that logotherapy was born (the word logos is Greek for ‘meaning’).

A form of existential psychotherapy, which involves examining and questioning the things which we take for granted in life so that we can have better insight into our thoughts, feelings and actions, logotherapy focuses on helping the client find meaning in their life, whatever their circumstances.

Frankl realised that we are not actually seeking ‘happiness’ as humans, but meaning. We are motivated by this need to find meaning, and it is this that helps us to overcome the pain that existence can bring.

So quite the antithesis of today’s self help movement with its emphasis on a ‘positive mindset’. In fact his book, which became world famous, was entitled, “Saying Yes to Life in Spite of Everything”.

Can suffering serve a purpose?

Frankl felt that even suffering could give us purpose and in his own writing he demonstrated that through the stories of clients.

One story he told frequently was of a visit from an elderly colleague who had been a widower for two years and could not get over the loss of his wife. Frankl left out the obvious platitudes and when the man had finished speaking about his pain, offered only a question –

“How would your wife have felt if it had been you that died instead of her?”

“You have spared her that suffering by living on, now you have to pay for that with your own suffering.”

The old man thanked him, shook his hand and left.

Frankl didn’t take away his suffering, he could not, but he helped the man see its meaning and thus it became easier to bear.

Like a difficult birth that gives us a wonderful child, if we can see a purpose to suffering, then it becomes manageable, even an achievement at times.

How can we discover meaning according to Logotherapy? 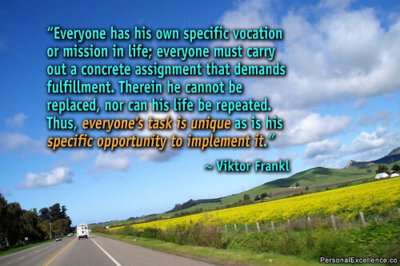 Creativity: what we give to the world through our work and deeds, including our hobbies and gifts that we give to others like our wisdom.

Experiencing: what we take from the world through our relationships, meeting people, meeting nature.

Attitude: Even if we can’t choose our circumstances we can choose how we want to deal with and respond to it.

Meaning is further derived from always remember that we have the power of choice, even in the face of what Frankl called the ‘tragic triad’ of pain, guilt, and death.

How do all these elements actually work in someone’s life? Here’s an example:

A mother of an autistic son was able to transcend what at first seemed a tragedy when she discovered that her son would never be able to do the same things as his peers – go to university, get married or leave home. The experience of understanding her son and what he could do helped her better understand what it meant to be human. She used this understanding creatively in that she became a support worker for children and families experiencing autism.

The family together had the attitude that they would support their sibling/son in learning to integrate with society as much as possible. He learned to drive and gained an apprenticeship though finding long-term employment hasn’t been easy. This family has discovered meaning through difficult personal events which cannot be changed or undone.

The tools of logotherapy

Unlike Freudian therapy, the therapist is not the expert but acts instead as a facilitator supporting the client in a journey self-discovery. The main tool for this is a system called “Socratic questioning” which includes:

The goals of logo therapy are then:

To show a client they are not a victim. You may be (ill/unemployed/bereaved) but it is not the sum of you.

To show a client they have independence. You don’t need the therapist to guide you. All you need to understand and be enlightened is already within you.

Do you know something about Viktor Frankl and logotherapy you’d like to share? Do so below, we’d love to hear from you.

2 Responses to “What is Logotherapy?”