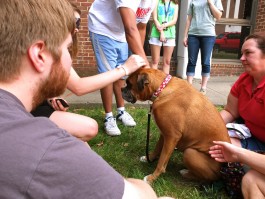 Whether you grew up with an animal pal, are an avid pet owner, or just enjoy playing with your friend’s dog or cat, for many of us there is a distinct and pure happiness associated with interacting with animals. But are animals just a happy furry distraction, or do they really have the power to substantially improve our moods?

Anthrozoology, the burgeoning field that studies the interaction between human and other animals, has found there to be measurable positive effects from relationships between humans and our non-human friends.

Although research is still ongoing and contradictory, enough benefits have been proven that America’s National Institutes of Health (NIH) started a $2.5 million research initiative on how animals affect human health and well-being.

What is Animal assisted therapy?

‘Animal assisted therapy’ is a formal and structured kind of therapy that often takes place in a clinical setting like a therapist’s office. It has the purpose of assisting patients with coping with emotional, social, or mental problems and helping them reach recovery-based goals. The idea is that being in the presence of a domesticated animal helps patients feel safer and more relaxed about sharing their life experiences and challenges.

AAT isn’t to be confused with Animal assisted activities (AAA). ‘Animal assisted activities’ is not goal-based or in a clinical setting, and is instead focused around providing comfort and companionship to people in, for example, nursing homes or prisons. AAA is still considered therapeutic, and the animals used are often called ‘therapy animals’. These are animals that are trained to be comfortable with people of all ages and temperaments.

In both AAT and AAA animals range from rats to donkeys to fish with, of course, familiar favourites like dogs and cats.

What can Animal assisted therapy help with? 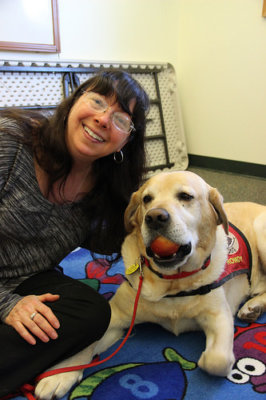 What is a session of Animal assisted therapy like?

You don’t show up and immediately meet an animal. A first stage is to simply meet your therapist with no animal present and assess your needs and how therapy could best serve you. It’s only in the second session that you’ll meet the therapy animal you’ll be working with.

In some countries like the United Kingdom, where AAT is not recognised as a sole treatment but only as a way of working alongside other forms of psychotherapeutic methods, ways of working with animals will vary. Perhaps your therapist might simply have the animal present during sessions as a way to calm you and help you feel open.

In America, were AAT is recognised, it’s often used to help clients who have difficulty with communicating and socialising (such as clients with autism). In these cases there is a structured approach used where the client is first taught to interact and communicate with the animal, then is given responsibilities and choice-making opportunities with the animal. The therapist will encourage the client to perhaps at first just get used to feeding and grooming the therapy animal. In time the client can learn how to give simple commands like sit or stay. In cases where motor skills need developing, the animal can be a way to motivate the patient, such as having them feed the animal. The overall idea is that these skills of socialising and making decisions can then be useful with person to person interaction.

Is AAT a legitimate form of therapy?

Like smiling doesn’t need to said to be good for you, the positives of the companionship of an animal are in some ways self-evident. Animals are simple and noncomplex in their openness about receiving and giving affection and love. But does this translate into long-term results in a therapy setting?

There is not seen to be enough hard data at this time to confirm this. Results of research are at present contradictory, and the methodologies of studies on animal therapy have been questioned.

Therefore AAT is not presently a recognised therapy in and of itself but is used alongside other treatments like Cognitive behavioural therapy (CBT).

How did AAT come into existence?

In some ways, England was ‘leader of the pack’ when it came to using animals to assist with mental and emotional distress. The earliest reported use of animals to ease distress was at a Quaker retreat in England in the late 18th century. And the UK’s famed Bethlem hospital (still visitable today) also recorded adding pets to the ward in the 1860’s and believing it helped the moral of patients.

The idea was made ‘professional’, though, in the 1960s by American child psychologist Boris Levinson. Levinson left his dog alone with a child he’d had a hard time communicating with, alone together in his office, to observe that the child happily chatted with the dog. Boris repeated leaving the dog with the child and found that the sessions vastly improved. Levinson then tested out using an animal in therapy with other children with positive results, so decided to publish a paper on the subject. Sadly, his efforts were largely mocked by the psychology community, although a survey the showed that 16% of 319 psychologists actually used companion animals while working with clients. 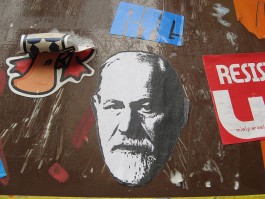 But along came approval from none other than Sigmund Freud. It was revealed in a biography that in most of Freud’s sessions, Freud had his Chow-Chow named Jo-fi present. Freud not only felt the dog made an accurate assessment of a patient’s mental state (either going up to calm patients or staying across the room from anxious ones), he found that the dog often had a calming effect on patients, especially children.

Case studies of the positive effects of Animal assisted therapy

An example of how AAT has been used comes from Elisabeth Reichart, PhD, working with young girls who were the victims of sexual abuse. She documented including her dog Buster in sessions. The children, awkward in sharing details with the psychologist, warmed to the dog’s presence. Holding and petting Buster, they whispered the accounts of their abuse into the dog’s ear.

Another example comes from a program that takes place in conjunction with a university and three prisons in Louisiana, America. Student veterinarians teamed up with prisoners to help rehabilitate feral cats, training the prisoners in how to look after the animals. The result of the pairing between prisoner and feline is prisoners going the distance to ensure the safety and well-being of their furry friends and both prisoners and cats more relaxed, friendly and open to treatment. 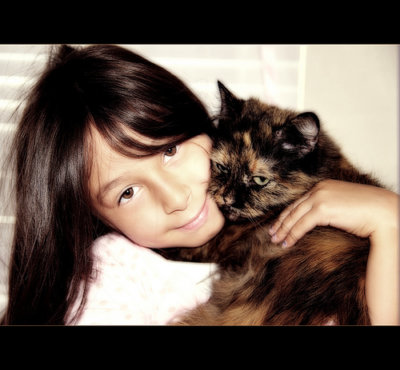 For children with autism, studies show remarkable results including less autistic behaviours like hand flapping and humming, less distraction, and an increased interest in engaging in conversation. One autistic girl that found international attention alongside her ‘therapy cat’ Thula is Iris Grace.

AAT has even been shown to have beneficial effects in the treatment of patients with dementia, decreasing their agitation, aggression and depression.

Other known instances of AAT and AAA include:

While some American states consider AAT a recognised practice, it’s not professionally accepted or widespread in the UK. This is largely due to the present lack of ‘hard evidence’ for it’s results. In other words, more studies need to be done to gain AAT recognition. As it stands, as AAT is practiced as part of of traditional therapy and patient progress is based on the overall sessions and not just on the benefit of an animal being present,case studies can often only been seen anecdotal.

A criticism of AAT and AAA is that expecting that any animal can be applied to any human is a dangerous assumption. Animals tend to have specific temperaments that range in warmth and acceptance, especially relevant for children who may be afraid of the animal. Therapy animals are, however, carefully selected. If a patient is frightened, then the animal doesn’t have to be a part of the session.

A further question asked of animal therapy is whether it is fair to the animals involved.

A 2013 study done by Gregory Berns, Professor of neuroeconomics at Emory University, provided evidence that dogs experience a cognition that is no different than young humans. This supported concerns about how animals, or at least dogs, feel about being ‘used’ by humans.

Thus far, research hasn’t been conducted across the spectrum of types of animals involved in AAT, but research led by the Department of Comparative Medicine at Messerli Research Institute has looked at the effect of Animal assisted therapy on dogs. It was found that so long as the dogs have freedom of movement, i.e. they are not on a leash, they are happy in or out of sessions.

How Do I Find A Practitioner Who Deals with AAT in the UK?

(Do to Harley Therapy’s commitment to only offer professionally recognised and evidence-based forms of therapy, note that AAT is not offered at Harley Therapy. )

Again, at this time in the UK there are no nationally accredited or validated professional qualifications for solely animal-assisted therapists or practitioners. It is only recognised as a add-on method to be used alongside other accredited forms of therapy.

As AAT is at present only practised alongside other therapy in the UK, if you are interested in receiving AAT or AAA, it is important that you ensure that the professionalism of the practitioner meets the legal requirements for providing therapy such as being registered with the BPS (British Psychological Society), BACP (British Association for Counselling and Psychotherapy), HCPC (Health and Care Professions Council) and/or the UKCP (United Kingdom Council for Psychotherapy).

The Society for Companion Animal Studies (SCAS), however, is introducing an Animal-Assisted Interventions Approved Provider Programme in 2014. They also provide a useful Code of Practise if you are thinking of working with a therapist who uses AAI.