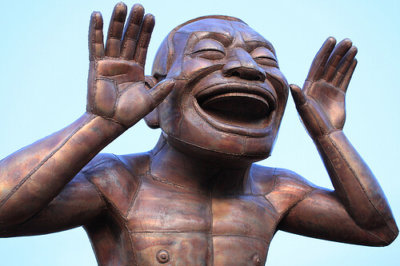 As babies, we laugh even before we talk. But why do we laugh? And what affect does laughter have on our brains, and our mental and psychological health?

Instead, laughter seems to be primarily about relationships. Neuroscientist Robert R. Provine, who studied laughter for over 10 years and wrote the book Laughter: a Scientific Investigation, discovered that laughter is not a learned behaviour. Instead, laughter is like an instinctive language we are born understanding, that seems to have the purpose of bonding us to other humans.

So how can laughter benefit your emotional and mental health?

1. Laughter helps you bond with others.

As mentioned, Provine’s research showed that we use laughter to connect to others. This was backed up by a study published in 2015. Researchers at University College London found that laughter causes us to open up more to others, making us more prone to sharing intimate details.

In a group of 112 students from Oxford university, those who had just watched a comedy clip were more likely to share personal information than those who did not. 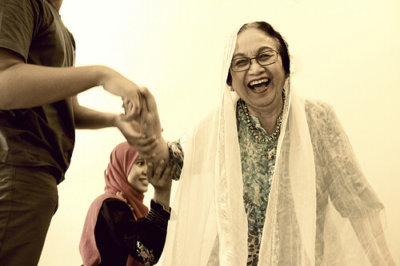 Researchers at the University of Maryland School of Medicine in Baltimore did a study that linked laughter to lowered stress in the body. Showing participants film clips that were mentally stressful caused reduced arterial flow, whereas film clips that caused laughter increased blood flow and improved the function of blood vessels, both of which leave the body more relaxed. So laughter had the effect of fighting off stress.

And another study, this time on older adults, showed that laughter lowered the ‘stress hormone’ cortisol (for more on cortisol and its link to stress read our article on the fight or flight response).

3 Laughter can improve your memory.

The same study at California’s Linda Loma university that showed reduced cortisol levels also showed that laughter improved short-term memory. Participants who watched funny videos had more than double the memory recall of the group that sat in silence.

Laughter makes you feel good because of its affect on the chemicals in your body. As well as lowering your cortisol it has an affect on the production of endorphins, a chemical that gives you a happy buzz.

A Stanford research team also found a connection between laughter and dopamine, the neurotransmitter that regulates mood and motivation amongst other things, and is also known for creating a feeling of pleasure. Watching funny cartoons was found to trigger activity in the the brain’s limbic system which is involved in dopamine regulation.

5. Laughter can help you attract a relationship.

Robert R. Provine’s research also showed that laughter has some gender bias. In conversations between men and women, women were 126% more likely to be the ones laughing and men were more likely to be doing the laugh-getting.

When Provine’s team looked at internet dating ads, they found women were more likely to be looking for a sense of humour in a partner and men more likely to suggest they could offer one. So your ability to laugh at a man’s jokes, or make a woman laugh, might be part of how you are attracting mates.

But are these studies saying I have to laugh to be happy? 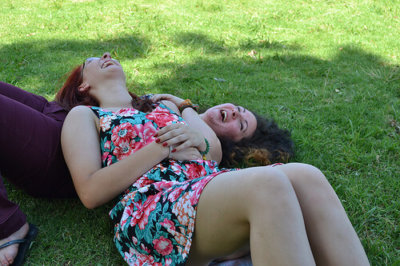 Studies on laughter to date are not foolproof. They often do not separate humour from laughter – which one is it that is giving the measured affect? And they have to date tended to involve small samples.

So no, it cannot be concluded that you must laugh to enjoy psychological wellbeing, or that laughing alone would not be enough to counter depression, or change your life.

Laughter is, however, increasingly seen as a wise and beneficial addition to a self-care regime. In fact Dr. Michael Miller, one of the author’s of a recent study on laughter’s benefits on coronary heart disease, suggests in an overview on laughter research that a time might come when “everyone gets 15 to 20 minutes of laughter a day in the same way they recommend at least 30 minutes of exercise”.

1. Keep Good Company. If you are always hanging around people who focus on the negative or never laugh, you might want to consider why you choose such peers, or try meeting new people with a different mindset to experience the difference it makes for you.

2. Monitor your media intake. The news doesn’t sell by focussing on the positive or the humorous, and tends to only laugh at others instead of with them. Start to take note of how much time you spend each day reading or listening to news or browsing social media, and try cutting back to see if it helps.

3. Try something new you are not naturally good at. Perfectionism is the opposite of humour, and only doing things we insist on doing well at means we are so focused on achievement we don’t relax and laugh. Find a friend who knows how to have fun and try something totally different – a salsa class if you are not a natural dancer, a life drawing class if you never progressed past stick figures.

4. Take improv classes. It might sound odd, but improv classes can come with a host of benefits. As well as seeing you laugh with others and maybe at yourself, they are said to build confidence and social skills.

5. Fake it. If you can’t fake laughter, fake a smile. It’s been discovered that your mind will take cues from your body, so a smile triggers the brain to think it’s happier (learn more in our piece on the power of body language to change moods). You might even find yourself naturally laughing before you know it.

Do you have a tip for how to enjoy more laughter in life even if you are not the funny type? Share below.