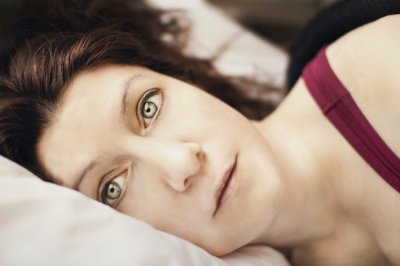 Have you had mental health problems in the past? Or a diagnosis or schizophrenia or bipolar disorder? Planning on having children, and worried about possible repercussions? The risk of postpartum psychosis is small but important.

What is postpartum psychosis?

Postpartum psychosis, also called ‘postnatal psychosis’ and ‘puerperal psychosis,’ sees a mother experience a break with reality in the days or weeks following birth. You will have sensory experiences and/or thoughts that seem real to you, but aren’t actually true.

A very serious mental health phenomenon, postpartum psychosis is much more than having the ‘baby blues’. If you feel you are experiencing psychosis, it’s important to seek help immediately. Book a same-day appointment with your GP, or go to the hospital.

The main symptoms of any form of psychosis are hallucinations, delusions, and confused thinking.

Hallucinations are sensory experiences of things that aren’t real. They most commonly involve hearing voices, or seeing visuals. But they can involve any of your senses. You could smell things, or feel like something is touching you when there isn’t anything there.

Delusions are thoughts that feel correct and you believe, but aren’t at all true. You might think someone is trying to to do bad things to you or your loved ones, or that your child is possessed or has been replaced at the hospital.

Confused thinking means your thoughts race, can seem jumbled, and can even make speaking clearly difficult. You might find that your confused thoughts are also leading to out of character behaviours and choices.

You may also have other symptoms, either leading up to or during postnatal psychosis, such as:

According to a review of postpartum psychosis published in the Journal of Women’s Health, while up to 75 per cent of women experience baby blues, and around 13 per cent postnatal depression, postpartum depression only affects about one in 1000 women. 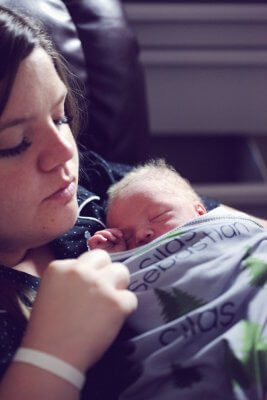 Having a baby is a big change, and it’s quite common for new mothers to experience mood swings. Often this involves crying, snapping at those around you, or feeling overwhelmed and gloomy. This is known as ‘the baby blues’. It tends to clear up in a few weeks.

For some women, it’s more than just the blues. They have very negative thoughts about themselves and the world, feel hopeless and despondent, and have changes to sleep and appetite. You can also can struggle to connect with your child. If this goes on for several weeks, you might be diagnosed with postnatal depression (PND).

Postpartum psychosis is different because you lose touch with reality. You have sensory experiences of things that aren’t real, or believe things to be true that aren’t. And you’ll act out of character, not just moody or sad. It’s as if you are suddenly someone else entirely.

Another difference is of awareness. If it’s baby blues or PND, you are aware that you are sad. If you have postpartum psychosis, you are in a state where things seem ‘real’ to you. So you aren’t necessarily aware that you are having a psychiatric episode. It’s those around you, and the way they are reacting to you, who can seem strange.

The same review in  the Journal of Women’s Health poignantly shares the story of ‘Ms. A’ as follows:

“Within 2 days of delivery, she told her husband that she thought he was poisoning her food and that the baby was staring at her strangely. She thought she smelled horses and heard them galloping outside her bedroom. She could not fall asleep even when her mother came to the house to care for their newborn and allow the patient to rest. At home, Ms. A. was able to sleep only 2–3 hours nightly. Her husband noticed that she would gaze out the windows in their apartment for hours without explanation.”

Who ends up with puerperal psychosis?

The reason some people develop postnatal psychosis and others don’t isn’t perfectly clear.

What is sure is that you didn’t ‘make’ postpartum psychosis happen. Your thoughts or doubts about having children or stress during pregnancy are nothing to do with it. It is not your fault.

What is at play is hormones and genetics. According to the Royal College of Psychiatrists (RPsych), if you have no history of mental health issues and no psychosis in your family, you only have a one in 1000 chance of developing  postpartum psychosis. If your mother or sister, on the other hand, had it, you have a 3 in 100 chance.

Your chance of developing postpartum psychosis is particularly higher if you already have had a diagnosis of schizophrenia or bipolar disorder, particularly type II. This is true even if these days you show no further symptoms.

What do I do if I am high risk?

If you have bipolar disorder, schizophrenia, or schizoaffective disorder and are worried, it’s important to be as prepared as possible. You can talk to your doctor and psychiatrist before getting pregnant, to discuss, for example, which of your medications you can continue during and after pregnancy.

If you are already pregnant, it’s important to let everyone know in advance that you are at risk, so you can together make plans for any eventuality. This means letting your partner know if you haven’t already, as well as your GP, midwife, and obstetrician.

If you were ill in the past but have been fine for a long time, don’t think you can just ignore your mental health history. Talk to your GP, and ask to be referred to a perinatal mental health unit or psychiatrist to discuss all possibilities in advance.

Self-care is also hugely important. If you can lower stress in your life, or ask for more support, it’s important to do so.

What do I do if I think I have postpartum psychosis? 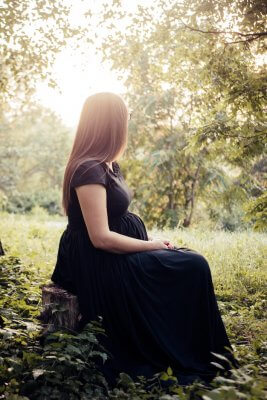 It’s a very serious situation so do treat it as one before any harm comes to you or your child. If you can’t get a same day GP appointment, go to your local A&E. If they say you don’t have postpartum psychosis and your condition worsens, then go back. If you want to talk to someone and can’t get through to your GP, you can call 111.

If you were already identified as high risk, and have a crisis team, then of course now is the time to contact them.

Will I be hospitalised?

Most women do need to be treated in hospital. Here in the UK you can ask to be put on a ‘Mother and Baby Unit’ (MBU), where mental health care workers can care for you and your baby.

Unless, of course, you are unable to care for your child at this time, prefer to be away from your child, or there is a waiting list for an MBU placement in your area, in which case you might be put on an adult psychiatric ward.

What is the treatment for postpartum psychosis?

It is generally a combination of medication and talk therapy.

Medications can include antidepressants, antipsychotics, and mood stabilisers.

Treatment can involve cognitive behavioural therapy (CBT), which helps you recognise and regulate the link between your thoughts, feelings, and behaviours.

How long is recovery?

Postpartum psychosis is not forever, and most make a full recovery.

The NHS states that, “the most severe symptoms tend to last two to 12 weeks, and it can take six to 12 months or more to recover from the condition.”

Do note that many women suffer depression after postpartum psychosis, as well as anxiety and confidence issues around their ability to parent. You might feel bad about the time you missed with your child, or struggle to connect with other mothers.

It’s important to remind yourself that postpartum psychosis is an illness, and in no way a reflection on your ability to mother. Each parent has their own unique journey, and it’s important to find support to help you with yours.

Reading this on behalf of a partner or loved one?

Watching someone you love experience psychosis, or being their partner or carer, can be an at times overwhelming experience. Do not overlook seeking support for yourself, too, in the form of counselling or a support group.

Looking for talk therapy for psychosis? Or helping a loved one with postnatal psychosis, and could use some support yourself? We connect you with London-based psychosis speicalists, as well as UK-wide registered therapists and online counsellors.

Still have a question about postpartum psychosis? Or want to share your personal experience with other readers? Use the comment box below.