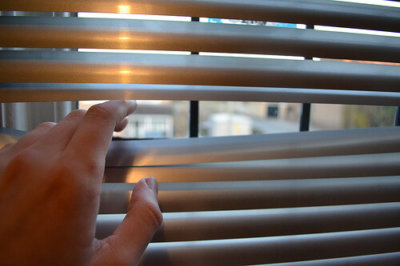 Uncertain modern times can leave us all feeling a little paranoid now and then.

But when does paranoia shift from moments of uncertainty to a real psychological concern?

As a general term, paranoia is the belief you are being threatened or secretly persecuted by something or someone, even if you have no proof that you are. The thoughts might be occasional or constant.

Many of us experience general paranoia at some time or another. Global events can be a trigger – suddenly you feel afraid to do things you previously took for granted (read our piece on ‘Anxiety from Global Events‘ if this sounds familiar).

Otherwise, you might experience paranoia from a period of high stress, too many days without sleep, or after using drugs or alcohol.

But for most of us, paranoia is fleeting. It’s when paranoia is long-term and directly affects the quality of your life and your ability to relate to others that it becomes a problem.

Long-term, psychologically acute paranoia can have many faces. It can be something small behind your paranoia, like being certain the colleague you sit next to at work is out to get you, or something far bigger, like being sure that the government is spying on you.

The following can be the signs you are suffering from paranoia:

When is it just paranoia, when is it a psychological disorder? 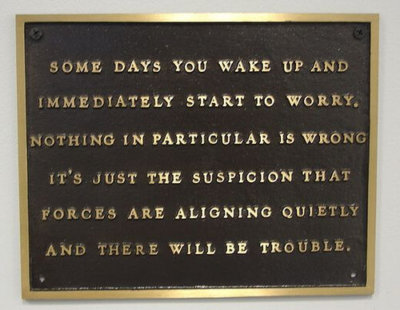 By: Son of Groucho

It depends on how long paranoia has been a problem for you, how acute your paranoia is, and how pervasive it is.

Paranoid personality disorder involves being distrustful and suspicious of others since at least young adulthood. And this way of thinking will pervade all areas of your life (read more in our piece on ‘What is Paranoid Personality Disorder?).

If your long-term issue is that you consistently feel you are being watched or followed, it could be a sign of schizophrenia.

But I’m not having delusions, am I paranoid or not?

Delusions happen when your irrational paranoid thoughts grow so strong you are completely convinced they are real, even when others show you solid proof they are not.

So you can suffer from paranoia without it getting to the delusional level where you think, for example, that you are connected to royalty (delusions of grandeur) or that you are being stalked by extraterrestrials.

If your bizarre beliefs continue a month or more, you might have what is called ‘delusional disorder’. Note that this disorder only affects your thoughts, contrary to any idea that you ‘see things’ (read our article on ‘Delusions vs Hallucinations‘ for more on this).

I worry a lot about bad things happening, am I paranoid?

If you have always been the sort to worry that the world is dangerous, it might be a character trait or a core belief from an unstable childhood. It’s only when you feel that things will go wrong because other people or forces are out to get you that your negative thoughts are paranoia.

Of course if your worry is leaving you with the symptoms of anxiety, it’s worth talking to a counsellor or psychotherapist about it. 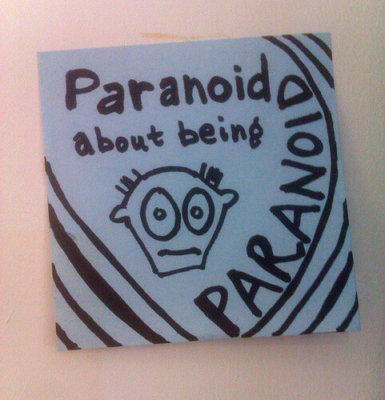 Sometimes thoughts of an impending danger are not paranoia, they are practical and very real. For example, if there is a local park where several people were recently attacked, you’d be right to be nervous and avoid it at night.

Paranoid thoughts are not based on facts, they can be vague stories that change track, and other people will not share your thoughts. Instead, others will be surprised, and either reassure you or try to prove to you how your thought is not true at all.

Here are some examples of paranoid thinking:

Everyone at school is always trying to upset me on purpose, I’m sure of it. For example, it is no accident that when someone threw food in the hall it landed on my locker.

My family is secretly plotting to steal all my money and bring me down.

My supervisor is always speaking in tricky ways with double meanings and little hints, all designed to make me feel inferior.

My neighbour wants to kill me, that’s why they left broken glass outside.

My council has cameras set up to watch me.

Every time I go to work there is a man on the same train platform as me and I am sure he is sent by my ex-wife to spy on me.

What causes people to have problems with paranoia?

Like most psychological conditions, paranoia tends to be a mix of different factors that change from one person to the next.

An unstable childhood or childhood trauma can be a factor. This could be an unstable parent, an environment that proved real danger to your wellbeing, or a parent who was unnecessarily strict and disciplining.

A childhood growing up in poverty could also be an influence. The feelings of powerlessness, victimisation, and discrimination that living in a lower socioeconomic bracket can bring have been found to contribute to the thought patterns that lead to paranoia.

Some people who suffer paranoia have been found to have brains that work differently to others. They don’t have the same faculties of reasoning. If this does not directly cause the paranoia, it causes social stress which would could then lead to paranoia.

Conditions that have paranoia as a symptom include:

Mental health issues that often come hand-in-hand with paranoia include:

Do I need help for my paranoia?

You don’t have to be convinced you have a serious mental health disorder to get help for your paranoia. In fact it’s much better to seek professional support before things worsen.

Paranoia is known to leave many people feeling isolated, lonely, and depressed, all of which is difficult to manage

In general, it’s time to seek support if you find your paranoia upsetting, or if it’s directly affecting the quality of your everyday life and your capacity to function well.

Of course if you do feel you might have a mental health disorder, do seek a proper diagnosis. Cognitive behavioural therapy (CBT) has also been found to be helpful for treating extreme paranoia. And the trusting relationship therapy creates can help you understand others and their intentions better and with time feel less guarded and fearful.

Would you like to speak to someone about your paranoia? Harley Therapy puts you in touch with some of the UK’s top therapists. Unable to reach one of our London locations? We also connect you with Skype therapists.

Still have a question? Want to share your experience of paranoia with our readers? Use the comment box below.

2 Responses to “What is Paranoia? And are you Suffering from it?”