Photo by Aviz from Pexels

Loneliness is a leading symptom for mental health issues like depression, and also, unfortunately, for suicide.

With statistics from the Mental Health Foundation now showing that three times as many British men than women die from suicide yearly, it’s time we saw male loneliness as the significant threat to men’s health it is.

Is it really loneliness?

We have all at some point experienced that achey feeling of discomfort that is loneliness. That gap between wanting social connection, and actually experiencing it. But what if we are surrounded by friends? And still feel that ache?

It’s a common misconception that if you’re amongst people and have an active social life, you can’t experience loneliness. You can. Loneliness is not the same as alone. We can be alone, for example, and not feel lonely at all. Loneliness is about feeling unable to connect to others. And this can happen even in a crowd.

Still aren’t sure if you are a lonely male or not? Consider the following symptoms of male loneliness:

But I’m not suicidal

This doesn’t mean loneliness is still not a serious issue. Again, it can cause depression, anxiety, and lethargy. And it also affects our physical health.

A recent study by the University of Eastern Finland, for example, tracked men between ages of 42 and 61. They found that social isolation could be as significant a health risk as smoking or being overweight, and left men at a higher risk for certain cancers.

If you’ve felt lonely since you were a child, it’s also worth noting that loneliness can be a symptom of autism spectrum disorder and Asperger’s. Or of having a personality disorder, where your way of seeing the world is very different so it’s hard to understand others or fit in.

Are male ‘friendships’ to blame? 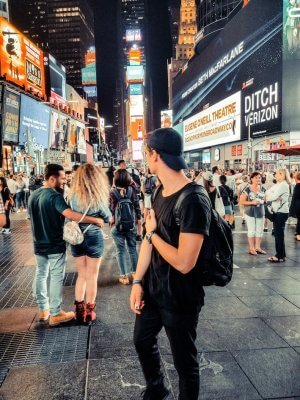 According to a YouGov poll, “Men are most likely to not have a best friend, with 32 per cent saying they don’t have any best friends, compared to just 25 per cent of women”.

Other research found that only 17 per cent of men said they last made a new friend between one to three years ago, suggesting that most men aren’t actively making new friends.

The top four reasons that men state for having difficulty making friends were:

If you grew up in a culture that still imposes stoicism, self-sufficiency, and masculinity on boys, then you can have a fear of rejection if you open up. This can mean you continue to struggle in isolation instead of reaching out, in what has been coined ‘alpha male loneliness’.

Research by the Samaritans suggests that masculinity plays a part in suicide in men. “Masculinity – the way men are brought up to behave and the roles, attributes and behaviours that society expects of them – contributes to suicide in men.”

Although social media has facilitated communication with everyone, a lot of the time, digital relationships are weak and unfulfilling. So it could indeed be contributing to the male loneliness epidemic.

So then what can you do if you are a lonely male?

If you feel you have outgrown your friends and that they can’t provide the connection you crave, it doesn’t necessarily mean cutting them off entirely. It can just mean it’s time to expand your social circle and meet people who you can more easily connect with.

It can help to start with interests you are passionate about. Sites like meetup.com are a way to connect with people you already have commonalities with, and offer both in person or online meetings, if that feels an easier first step.

Whether you don’t have friends or struggle to make ones, a men’s group is often the easiest way to forge close friendships. As well as in person, these groups are found on social media or elsewhere online.

By joining a men’s group, you’ll meet men who also struggle with loneliness and want intimate and meaningful friendships. They are also an opportunity to meet other men who share your interests and goals.

3. Find ways of connecting that work for you.

Not everyone is talkative, or likes to send texts or share secrets. If connection for you is more about engaging in activities like sport together, then that’s fine. What matters is deciding to make this activity a priority now, and not let poor planning mean it stops giving you the connection you need.

Mindfulness apps like Headspace and Calm now provide meditations designed specifically for loneliness, and Headspace also offers group meditation. And as a side benefit, mindfulness has now been shown by research to lower anxiety.

Another strategy for tackling male loneliness is the practise of expressing gratitude. This can be through journaling or guided meditation.

It helps you identify and accept how you’re feeling and bring to light the things you’re grateful for. Practising gratitude also helps to generate positive thoughts and feelings that can help your mindset.

Get support with relating.

Sometimes our loneliness is not just as we don’t have friends who understand us. It relates to the way we were raised and our childhood experiences. We were lonely at home, where our parents didn’t appreciate us or teach us healthy relating skills. Or we experienced trauma that affected our self-worth.

This can mean we need support to feel worthy and to relate better. A talk therapist can help you process difficult past experiences and emotions, then learn new ways of relating that mean you feel understood and appreciated.

A psychologist or psychotherapist can also recognise if you have further issues that might be leaving you lonely, such as autism or a personality disorder.

Willing to do what it takes to stop feeling so alone? We connect you with some of London’s most highly rated psychologists and psychotherapists who can help. Or use our booking platform to find UK-wide registered therapists for all budgets.

Still have a question about male loneliness or want to share your experience with other readers? Use the comment box below.

Jaffor Bhuiya is a content writer who likes to write about mental and physical health, and is fascinated by the role of nutrition, alternative medicine, mind-body techniques, and exercise in preventing and alleviating various issues. Find him on Twitter at@jbhuiya07.