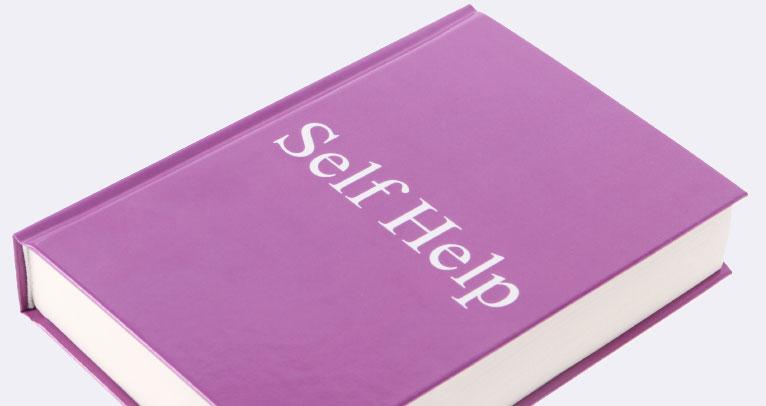 What are Cognitive Distortions?

The next time you feel stressed or worried, take a moment to notice what you are thinking. It's highly likely that you'll find your mind is full of negative thoughts.

There is a very strong correlation between what we think and what we feel. When we are feeling challenged or unhappy our thoughts tend to be quite dramatic and absolute, along the lines of 'I’m useless', 'I can’t do anything right', and 'nobody likes me'.

These types of thoughts are called “cognitive distortions” in psychology –  a term that means that the way you are thinking about something doesn’t necessarily match up with the reality of what’s going on.

Why are Cognitive Distortions so important to understand?

Cognitive distortions, with all the extreme thinking they can involve, are often the beginning of a negative 'loop' that can have you spiralling further and further into bad moods until it feels like there is no way out. This is why distorted thinking is so common amongst those who suffer low moods, anxiety, and low self-esteem.

What does this 'loop' look like? A thought affects your feelings and your bodily sensations, which then combine to dictate your behaviour. And your behaviour then triggers the next thought you have which begins the cycle all over again. Of course if that first thought is negative, the entire cycle tends to lead to an even more negative thought, and on it goes. This is illustrated in the diagram below.

For example, thinking a thought like 'nobody likes me” can mean that you start to feel anxious and self-conscious around others (feelings), which in turn causes sweating and heart palpitations (bodily sensations). This then results in you choosing to withdraw from others (behaviour), resulting in you feeling left out and alienated which then produces another negative thought, such as 'there is something wrong with me', which starts the cycle all over again. 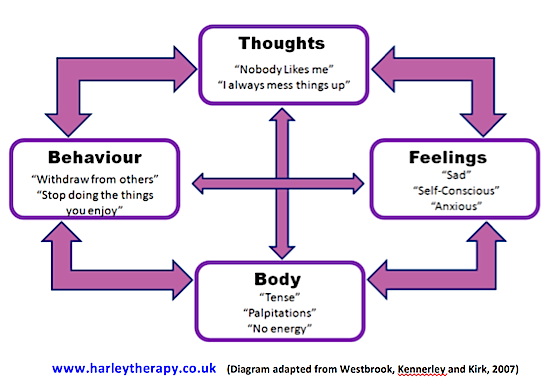 Cognitive distortions are at the core of how many Cognitive behavioural therapists (CBT) work with you to change your moods. By helping you recognise when you are thinking distorted thoughts, they help you to begin to question such thoughts, and then eventually replace them with more balanced thoughts. This might sound simple, but negative thinking is often a strong habit, so entrenched it is unconcious and can be seen as 'normal' to you. To change cognitive distortions to balanced thinking can be quite a process of focussed work and attention, but your therapist will keep you going in the right direction.

1. 'All or Nothing' Thinking

'All or nothing' thinking is when we see things purely in 'black or white'. These types of thoughts are characterised by terms such as or 'every', 'always', or 'never' .  Everything is seen as good or bad or a success or failure. It is generally the negative perspective that is endorsed, discounting all the shades of grey that lie in between the two focussed on choices.

Example: If you get eighty per cent on a test, you feel like a failure that you didn't get a perfect score.

An individual who ‘jumps to conclusions’ will often make a negative interpretation or prediction even though there is no evidence to support their conclusion. This type of thinking is often made when thinking about how others feel towards us. It can show up as either 'mind reading' (assuming the thoughts and intentions of others) or 'fortune-telling' (anticipating the worse and taking it as fact).

Thinking in an over-generalising way means we will often see a single unpleasant incident or event as evidence of everything being awful and negative, and a sign that now everything will go wrong.

4. Magnifying or Minimising (also referred to as “Catastrophisation”)

Thinking in a magnifying or minimising manner is when we exaggerate the importance of negative events and minimize or downplay the importance of positive events. In depressed individuals, it is often the positive characteristics of other people that are exaggerated and the negatives that are understated (and then when thinking of oneself, this is reversed). When we think catastrophically we are unable to see any other outcome other than the worse one, however unlikely this result may turn out to be.

Example: You send out the wrong letter to a client at work, and this turns into “I will now lose my job, and then I won’t be able to pay my bills, and then I will lose my house.”

Mental filtering is when we focus exclusively on the most negative and upsetting features of a situation, filtering out all of the more positive aspects.

Example: You undertake a presentation at work which is complimented and praised by ninety-five percent of the team - but you dwell and focus on the five percent of feedback that you could have done a slightly better job. This leaves you convinced you didn't do well enough and not only don't you recognise and enjoy the praise being offered but you decide not to participate in future events.

Disqualifying the positive is when we continually discount and dismiss the positive experiences we encounter, by deciding they are unimportant or 'don't count'.

Example: A friend compliments you on a dinner you made, but you decide that “they are just saying that to be nice” or “they are trying to get something out of me”.

A person engaging in personalisation will automatically assume responsibility and blame for negative events that are not under their control. This is also called 'the mother of guilt' because of the feelings of guilt, shame, and inadequacy it leads to.

Example: You feel it's all your fault that your dog injured his foot even though you weren't at home when it happened but were out shopping. Your thoughts might be 'if only I didn't go out' or even 'maybe when I came home I accidentally stepped on the dog and hurt him' even though this is entirely unrealistic.

Individuals thinking in 'shoulds', ‘oughts; or 'musts' have an ironclad view of how they and others ‘should’ and ‘ought’ to be. These rigid views or rules can generate feels of anger, frustration, resentment, disappointment and guilt if not followed.

Example: You don't like playing tennis but take lessons as you feel you 'should', and that you 'shouldn't' make so many mistakes on the court, and that your coach 'ought to' be stricter on you. You also feel that you 'must' please him by trying harder.

Emotional reasoning is when we assume feelings reflect fact, regardless of the evidence. The idea here is “I feel it, therefore it must be true”.  Such thinking can lead to self-fulfilling prophecies whereby our thoughts can end up eliciting the very behaviour we predicted, just because we changed our behaviour in accordance with that thought.

For example, if you think “I feel ugly and stupid, so then I must actually be ugly and stupid” you might then stop buying yourself new clothes and start doing poorly at the course you are taking at university, even though you look fine and were doing very well at school.

Labelling is an extreme form of 'all or nothing' thinking and overgeneralisation.  Rather than describing a specific behaviour, an individual instead assigns a negative and highly emotive label to themselves or others that leaves no room for change.

Example: You make a mistake on a form you filled out and it's sent back to you in the post. So you decide “I'm such a loser” or “I'm so stupid” rather than thinking “I made a mistake as I had a busy day when I was filling this out”.

Do you suffer from Cognitive Distortions?

If you recognise any of these types of thoughts in yourself, instead of panicking, realise that by learning to see your own patterns of thinking you are halfway towards change. Try monitoring when and how often you experience cognitive distortions, and in what situations they occur. And consider working with a CBT therapist to recognise, challenge and change your thinking patterns more quickly. 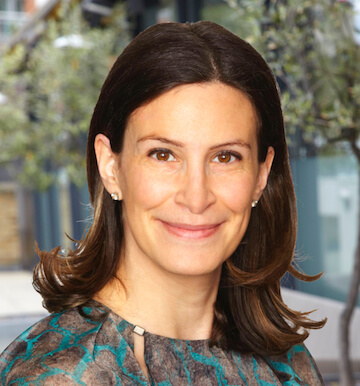 Disclaimer: This Guide has been produced to complement but does not replace any advice, guidance or information from a health professional. See here for full disclaimer.

Sharing: You may use any of this information by citing us as the source via its web link. Many thanks.